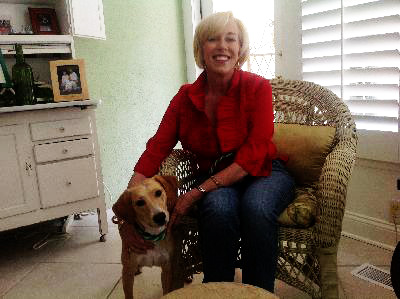 Bree was adopted by Jane Goodson on August 4th, 2012. Jane had adopted a black lab, Cleo, from the Humane Society of South Coastal Georgia around 1999-2000. Cleo, like all of Jane’s previous dogs, had been a shelter dog and lived to be 13 1/2. Jane had some great experiences with her rescued dogs that all lived to be about 13 or 14 years old and loved the characteristics of Labrador Retrievers. When Jane lost Cleo in early June of this year, she decided to wait before adopting another pet . She commented, “You have to be ready, you just can’t go out and adopt another dog to replace your loss.” The thought of being pulled around by a large dog was something she decided was no longer the best idea for her, but she wanted a dog with the characteristics of a lab, a smart dog that would get along with her cats, enjoy children and would be sociable with other dogs as well. Part of Jane’s summer plans included a trip to New York and she was going to wait until she got back to consider another dog adoption. Jane said, “I had been looking online at some of the available dogs for adoption, and then I saw this picture on the HSSCG Facebook page of a little girl hugging Bree. There was something about that little girl with her arms around that sweet dog that I connected with so I had to call and see if she was still available!” When Jane called, she found out that Bree had been brought to the Adoption Center in May by a supporter who had found the stray female and her two puppies on the side of the road in Brunswick. Bree was a two year old Labrador/Hound Mix that was healthy, happy and still waiting for a forever home. Bree had been trained by a child at camp this summer through “Pet Partners at Work”. The child spent the week teaching her to sit and roll over, jump over things and walk on a leash. The purpose of the camp is for the children to work with an animal to learn more about pet responsibility, the humane treatment of animals and to help get it adopted. The campers had an opportunity to journal their camp experiences while working with a dog trainer to learn how to teach pets tricks, do some pet grooming, walk a variety of dogs and socialize with the pets waiting for adoption. Jane sent her friend Bob to the Humane Society of South Coastal Georgia to see about Bree and to help her decide if she was a “good fit” for her. She had looked at another Lab, but it had too much energy for her and Bree seemed to be the right size and temperament. Jane said she felt that she had “vetted” the sweet stray and made sure she was a great choice before meeting her in person. “I decided to go ahead and get Bree before my trip to New York because I was afraid she would be gone. When I went to the Adoption Center, a volunteer (Sher) brought her out of the kennel and I immediately knew that she was meant to be with me.” What made this Happy Tails such a unique story is that Jane Goodson loves children and is the Director of the Junior Board at the Humane Society of South Coastal Georgia. She had no idea that Bree knew all the behavior commands and had been trained by one of the programs she supported. “I had wanted a dog like Bree, sociable and sweet, that would get along with children and other dogs. Getting along with cats and children was my number one priority in adopting another dog, and I ended up with a real sweetheart”. The camper who worked with Bree wrote a journal entry in June, “After a 2nd day in training, we made so much progress. She knows how to roll on her stomach, sit, lay, walk on a leash and jump. She also loves to run beside me and play with other dogs. She loves the pool. I think and hope that she’ll get adopted.” Later in the week another entry reads, “I hope Bree gets adopted. She is one of the sweetest dogs ever!” When Jane found out that Bree was trained by one of the campers, she welcomed the child into her home to learn more about the commands that were taught and to show the child that Bree was adopted into a loving home. All the things that Jane wanted in a companion were found in Bree because someone brought her to the Humane Society and then she was chosen by a special camper who had the patience to train her and the heart to love her. It was a special reunion for all of them and a confirmation that “something extraordinary happens when you visit” the Humane Society of South Coastal Georgia!