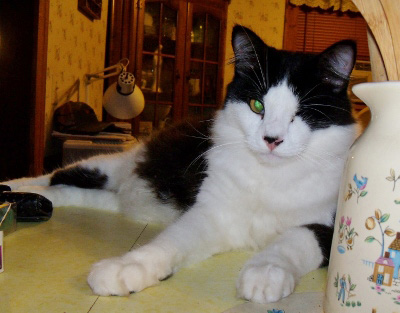 Dear Humane Society, I have been wanting to let you know how Popeye is doing for awhile; but, your most recent email has finally spurred me to do so. I adopted Popeye the end of December 2012. My husband and I came to the shelter looking for a playmate (or sibling as we refer to them) for a kitten that I rescued. This kitten was abandoned in a parking lot, by its mother the day it was born. We successfully raised this kitten, (Mocha) who thinks she is human! She is now about to turn 2 years old. Since she doesn’t particularly care for our dogs, we thought she would like a brother or sister, thus leading us to the Humane Society. The day I adopted Popeye, was the first day he was eligible for adoption; he was just a baby, about 8 weeks old. While in the room with the cats, I heard one of the staff telling others about Popeye. His story moved me so, that I knew he was the one that I had to have. Apparently, he came to the Humane Society after a bird of prey attacked him. The attack caused him to lose one of his eyes. He had been in the medical ward at your location since he came to the shelter. Popeye has a bob tail, we are not sure if that was the result of the attack or not. Also, he doesn’t meow; he, more or less, squeaks and not very often at that. Again, we are not sure if this is a result of damage from the attack. At first, I thought the people who were looking at him were going to adopt him. Holding my breath, I hoped they would leave or choose another cat/kitten. As fate would have it, they did leave. I immediately scooped him up and told the staff I wished to adopt him. We completed the paperwork and took him home. Once at home, we allowed Popeye to get familiar with his new surroundings. A short time later, I pulled out a toy for him to play with. He played with this toy for 3 hours straight. He stopped periodically and briefly to turn around and look at us like “this is the greatest toy ever!”. He finally got tired and climbed up in to my lap and went to sleep! Popeye is the sweetest boy! He seems to be so appreciative of the second chance at life. Popeye meets me at the door every day when I come home. As soon as I walk in, he rolls on to his back and rolls back and forth until I pet his belly. We have learned that this is his way of telling he is happy. Mother’s day weekend last year, we added another kitten, Callie, to our family. When brought her home, Popeye immediately took charge of her. He was constantly bathing her. He did not let her out of his sight for more than a few seconds. Popeye and Callie are still inseparable. Callie must be the cleanest baby in the world, as Popeye still bathes her every time she sits still! Oldest sister, Mocha, is quite happy to let him be the babysitter. I am so grateful to the medical staff at the Humane Society for saving Popeye; along with the entire staff for the love and care he was given. I love Popeye dearly and I am so grateful I came to the shelter that fateful day. I have attached photos for you to see. Popeye has grown quite a bit since the day I adopted him. He now weighs 10 pounds! Please feel free to share Popeye’s story, as I hope it will inspire others to provide a “furever” home to animals at your shelter. Each animal there only wants a loving family, they deserve a second chance, as it was not their fault they ended up at the shelter. I would tell anyone looking to adopt a cat or dog to please look at the Humane Society first. I was thoroughly impressed with your facility. It was very clean, the staff greeted us and was very helpful. From my observations, everyone at the Humane Society seems to truly care for the animals and wants them to be loved and happy. I also noticed all the animals appeared to be very healthy. I have been to other shelters where the animals all seemed sickly (runny eyes and noses, etc). Having a medical staff on site is awesome for the animals. Please continue the good work that you do each and every day! Sincerely, Vickie Moore