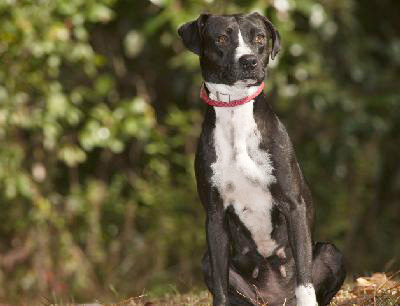 Tilly was brought to the Humane Society in late 2010 after being found as a stray in Brunswick. Covered in ticks and scared to death, the medical staff at HSSCG took great care of her. Over time Tilly found refuge in the form of her kennel and it became her “safe zone.” It was the only place she felt comfortable and she guarded it as her home. When potential adopters came to visit all Tilly saw were strangers invading her home. Staff and volunteers understood her behavior because they knew Tilly and spent time with her outside of her kennel. But it was hard to explain to visitors and they would always pass her by. During her time at HSSCG Tilly met two very important people. The first was Carol Campbell, a dedicated and long-time volunteer. Tilly became a personal favorite of Carol’s and she worked with her quite often to help her get adopted. Since Tilly spent an extended amount of time at HSSCG and Carol visited often they developed a trusting friendship. The second important person to enter Tilly’s life was Roy Scarborough, a long-time volunteer and certified dog trainer. With his training he is able to work with some of the dogs who have developed certain issues or fears. Roy spent a great deal of time working with Tilly, saw the progress she was making and what a wonderful dog she truly was. He also saw the difficulty she was having getting adopted as time after time she was passed by. In early 2012 Roy decided to adopt Tilly and took her home to be a part of his family. Recently Carol went to Roy’s home to visit with Tilly where she now lives with four other dogs. Carol described Tilly as, “so happy – she feels safe, loves her companions, and is glad to be around people she knows.” As Carol approached her she rolled over on her back and didn’t show the least amount of fear or reluctance! As Carol left, she drove past the fenced area and rolled down the car window. “I said goodbye to her the way I did after every visit for almost a year and a half – and she turned her head like the RCA Victor dog – that was when I knew for sure that she remembered me!” Such a wonderful story is a tribute to some of the wonderful volunteers who help care for the animals temporarily homed at HSSCG and the true difference Roy is able to make when he works with a dog. We couldn’t be more grateful for the dedicated volunteers we have and of course for Tilly!